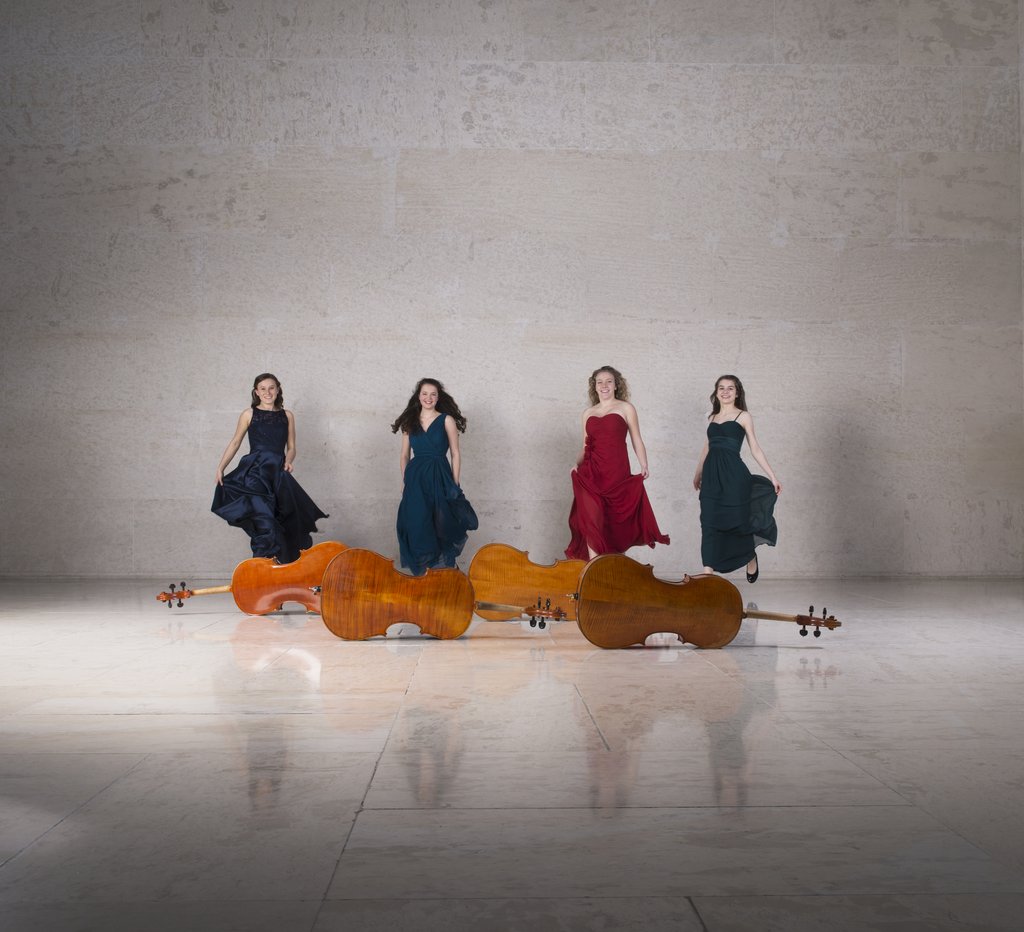 The Vienna cello quartet known as Die Kolophonistinnen consists of the four young musicians Hannah Amann, Marlene Förstel, Elisabeth Herrmann and Theresa Laun. The name of the ensemble refers to colophony or rosin, an amber-coloured rosin obtained from pines that creates the static friction between the bow and the strings and is what  makes  the  wonderful  sound  of  the  cellos  possible in the first place.

Since the founding of the ensemble in 2014, the four cellists have given regular concerts in Germany and abroad and have been successful in a number of competitions. In 2015 and 2017 Die Kolophonistinnen won a first prize at the federal level of the Austrian music competition “Prima La Musica”. This was followed by their first major appearances at the Norwegian Embassy in Vienna, in the concert cycle of the International Chopin Society, and at the Austrian Embassy in Berlin.

The cello quartet achieved a breakthrough in 2016 at the “BePhilharmonic Strauß Music Contest”, a young musicians competition organized by the Vienna Philharmonic. As one of the award-winning ensembles, they were given the opportunity to perform on stage at the Vienna Philharmonic’s Summernightt Concert in 2016. Their presentation led to a performance in the film shown during the interval of the Vienna Philharmonic’s 2017 New Year’s Day Concert, which is broadcast throughout the world. In December 2017,  through the “Musica Juventutis” competition Die Kolophonistinnen won the opportunity to perform in the Schubertsaal of the Wiener Konzerthaus and they also played at the anniversary concert “35 Years of Musica Juventutis” in November 2018. In early 2018 these four cellists gave their first full-length concert as part of the “Kempen Klassik” festival in Germany. In the same year they became members of the Yehudi Menuhin organization “Live Music Now” and since then have regularly performed at concerts in hospitals, old people’s homes and schools.

Their first concert tour in January 2019 took Die Kolophonistinnen to Chile. In the course of their two-week visit they played eight concerts in different parts of the country. As part of the Chilean festival “Campamento Musical”, the four musicians were also involved in orchestral projects and acquired their first experience as teachers. At the beginning of February of the same year, the cello quartet reached the final of the “Fanny Mendelssohn Förderpreis” and was invited to Hamburg. With the concept they submitted for a CD and their musical presentation on site, as it were, the young artists won the second prize.

In spring 2019, Die Kolophonistinnen gave numerous performances and played full-length programs. They give concerts at festivals such as Promusica Carinthia in Villach, Allegro Vivo in Horn at the Quarter Festival Lower Austria. They played in the French Embassy in Vienna and performed in the theatre of Schönbrunn Palace where they were accompanied by the, Young Masters Orchestra. The ensemble has been part of the Jeunesse since the 2019/20 season and gives concerts in elegant halls in the various Austrian federal states. In May 2019, they performed as a supporting group in the Brotfabrik in Vienna as part of the Jeunesse “Start-Up!” concert series. In spring 2020 Die Kolophonistinnen gave a concert in the Musikverein Graz.

Furthermore the quartett released its debut-album with the title “Heldinnenleben” with the Austrian label Gramola. In the 2020/21 season, the artists will take part in numerous projects as the “Featured Ensemble” of Jeunesse. In January 2021 they will make their debut at the Musikverein in Vienna.